Jonathan Brown was the son of Mary Brown and Henry Brown, the brother of Judy Brown, and the foster brother of Paddington. He knows a lot about chemistry, science and steam trains.

Jonathan is eager to accept Paddington into the family. When Paddington floods the bathroom and rides down the stairs in the bathtub, Jonathan says, "That... was amazing." He is also shown to love Paddington very much, by showing him his secret steam train. Later yet, when Paddington is kept prisoner, he raises awareness by posting Have You Seen This Man (the thief) posters in the shape of Paddington's name on a wall. 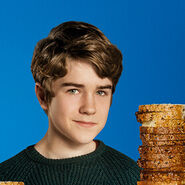 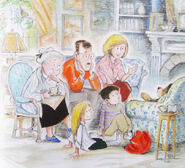 Add a photo to this gallery
Retrieved from "https://paddingtonbear.fandom.com/wiki/Jonathan_Brown?oldid=6647"
Community content is available under CC-BY-SA unless otherwise noted.