Paddington 2
Knuckles McGinty is a former inmate in HMP Shepton Mallet Prison. He first appears in Paddington 2 and may appear again in Paddington 3. He is played by Brendan Gleeson.

Although the marmalade making gets off to a rocky start, Knuckles eventually cooperates by squeezing the oranges, cutting the rinds and helping Paddington. Once the marmalade is served to the prisoners, Knuckles hides in the kitchen until Paddington draws him out to see how the inmates appreciate the change of menu. Knuckles experiences pride for the first time after seeing the inmates reaction to the marmalade sandwiches. After Phibs requests dessert, Paddington suggests that the other inmates could contribute recipes. Knuckles assumes that the inmates know nothing about cooking, but is proven wrong when Spoon, Charley Rumble and T-Bone all offer recipes. The prison becomes a much brighter, happier place after the menu changes.

During Visiting Day, Knuckles offers to help the Browns by gathering the fellow inmates to look at the criminal sketches that Mary has drawn of the thief, the knight and the nun. Henry insists that they should not be seeking advice from Knuckles and the other inmates, and insults them, calling them a 'hideous rogue's gallery'. He makes a personal attack against Knuckles, saying 'as for that bearded baboon in the middle, he's hardly got two brain cells to rub together'. Once Knuckles reveals they can hear Henry's comments on the other side of the glass, Henry apologizes profusely but Knuckles waves it off. None of the inmates recognise the pictures, and Knuckles suggests that they shouldn't be looking for a criminal gang.

Knuckles hatches an escape plan with Spoon and Phibs that requires Paddington. They try to convince Paddington that the Browns won't find the real thief, and they will eventually forget about Paddington, but Paddington is adamant that the Browns will find a way to free him. After the Browns miss Visiting Day after trying to prove Phoenix Buchanan is the thief, Paddington loses hope and agrees to help Knuckles and the other two inmates to escape. They promise to help Paddington clear his name and catch the real pop-up book thief. The four inmates escape during the night, using the laundry basket and sewn together tablecloths to make a hot air balloon and float out of the prison perimeter. However, once they escape and change into their regular clothes, Knuckles, Phibs and Spoon tell Paddington that they are planning to flee the country instead of proving Paddington's innocence. They ask Paddington to come with them but he refuses and ran off into the night.

On a plane headed away from London, the three inmates listen to the announcement of their escape on the radio, cheering. However, it is followed by an update on Paddington's whereabouts (on the Kozlova train) and his imminent capture at the next stop after Paddington Station. The inmates discuss helping Paddington, leading Knuckles to say his catchphrase: 'I don't do nuthin for no one for nuthin'.

Paddington is in a life-threatening situation. He is locked in the train's brakevan that crashes down the river by Phoenix Buchanan, who was unfortunately caught by Judy, Mrs. Bird, and Mr. Brown, who knocks him out and is taken into custody instead of Paddington, who nearly drowns to death. Mary Brown pulls hopelessly at the chains that secure the door. It seems all hope is lost, but then the clear sound of a plane engine can be heard, followed by Knuckles saying 'let's go lads'. Together, the three inmates and Mary manage to break the chains and free Paddington, allowing him to come up for air. Paddington starts burning up, so Mary picks him up and walks back towards the train that Jonathan is conducting, followed by the three inmates.

In the credits of the film, Knuckles is pardoned by the judge for showing himself to be a changed man. Knuckles then opens a tearoom in London, named 'Knuckles' Sandwiches' which becomes incredibly successful.

Before meeting Paddington, Knuckles wouldn't help anyone. He was a short-fused, violent man known for brutally attacking anyone who would criticize his cooking. However, that changed when he and Paddington made marmalade together. He later helped Paddington again by saving him from drowning.

Knuckles most likely had a rocky upbringing in a lower-class family. His father told him repeatedly that he would amount to nothing, which critically damaged Knuckles' self-esteem. He also appears to have been in prison for a long time. Knuckles may also be illiterate, as certain scenes suggest. Knuckles has a habit of mispronouncing words, such as baguette (ba-gwette). He also has a tattoo on his knuckles, spelling out his name 'with a capital N' as N-U-C-K-E-L-'-S. It is likely that he earned the name Knuckles in prison, as his real first name is unknown, but begins with the letter 'D'. Knuckles' prisoner number is 348902.

Although Phibs used to be a restaurant critic, Knuckles was under the impression that none of the other inmates know about food ('they wouldn't know their pectin from their paprika') which may be why he didn't accept criticism of his food from them. He also has a fear of failure ingrained in him because of his father, which is why he was nervous after serving the inmates the marmalade sandwich for the first time. However, the positive reception to the meal made him light up with a feeling that he didn't recognise — pride.

Knuckles' hair still retains a few strands of light brown, although it is predominantly white. He has a short beard and shaggy hair. For the majority of the movie he is wearing a blue and white apron over a white shirt and pants. His outfit was not accidentally dyed pink by Paddington, like the rest of the inmates' uniforms. His regular clothes consist of a grey flat cap, purple shirt, brown jacket, jeans and boots. 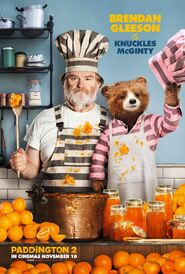 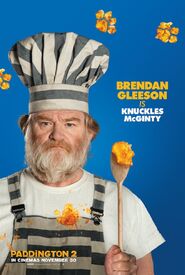 Knuckles and the Prisoners on Visiting Day (Paddington 2)

Community content is available under CC-BY-SA unless otherwise noted.
Advertisement